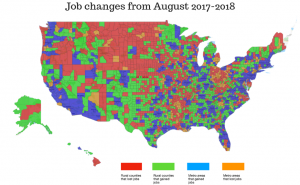 The Daily Yonder, from whom the above map is taken, reports that rural counties continued to lag their urban neighbors in employment. (Earlier reports on the pattern here and here.)

In the 12 months ending this past August, the U.S. added over 1.7 million jobs. But only 38,000 of those new jobs found their way to rural counties, according to a Daily Yonder analysis.

More than two-thirds of the new jobs were located in the nation’s largest metropolitan areas, those with more than a million people.

Note the red (job loss) band along the Olympic Peninsula and in Northeast Washington. Last April, we cited an article by Tim Marema that found rural communities with a manufacturing presence fared better than those without.

Manufacturing-dominated counties have made the biggest comeback since the recession, but employment in those counties is still 2 points lower than it was 2008…We hear a lot about the decline of rural manufacturing, but counties where that industry predominates actually fared better than the rest. Those counties lost about 2% of their overall employment for the period, dropping by approximately 100,000 jobs to 4.6 million from 2008 to 2016. Manufacturing counties also had more jobs than any other type of county except nonspecialized ones. One out of every four rural jobs is in a county dominated by manufacturing.

Yet another reason to celebrate our state’s manufacturing industries, as the Association of Washington Business did recently with their second annual bus tour highlighting Washington manufacturers. A strong manufacturing presence is one of the keys to closing the urban-rural economic divide.