The Daily Yonder reports on the national trend we see playing out in Washington: Employment growth remains uneven, concentrating in metro areas while rural communities continue to struggle.

More than nine out of 90 new jobs created in the last year were in the nation’s metropolitan counties, according to new data released last week by the Bureau of Labor Statistics.

Unemployment rates dropped in rural as well as urban America. But there is a trend toward a concentration of new jobs in urban counties. Only 7 percent of new jobs since April 2015 were located in rural counties or in micropolitan counties, those with towns between 10,000 and 50,000 people.

The Association of Washington Business wrote about the “worrisome news on unemployment” in this week’s Fast Facts, citing the most recent national jobs report.

Fresh signs of economic trouble emerged last week as May’s U.S. labor statistics showed that employers were only able to add 38,000 jobs in the month, the lowest number in more than five years. Even what appears at first to be good news in the report – that the U.S. unemployment rate dropped from 5 percent to 4.7 percent – is actually further bad news. That number is lower not because of new jobs, but because nearly half a million jobless Americans simply stopped looking for work, and thus were no longer tallied as unemployed, The Associated Press reports.

In its story, AWB included the April county unemployment map from the state Employment Security Department, which clearly shows the challenges faced by many of the state’s more rural counties. 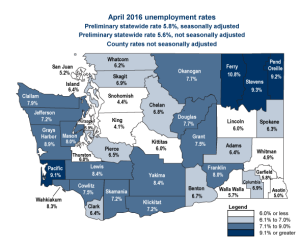 In our 2015 foundation report, we wrote of the uneven recovery. Although the numbers have changed, the trend has not.

The Opportunity Washington plan is

…a roadmap for expanding Washington’s culture of opportunity to individuals, families, employers, and communities in every corner of the state.

We will continue to promote policies that encourage investment and job creation, believing that every community in Washington should have the ability to build a strong local economy and provide opportunities for its residents to prosper.