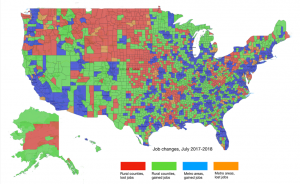 Job growth continues to flow to metro areas. The Daily Yonder, from which the above map is taken, reports,

The slower growth rate in nonmetropolitan areas means that U.S. employment continues to shift toward urban markets and away from rural ones.

We’ve reported on the persistence of this trend and efforts in our state to boost employment and economic opportunity in rural areas through the Rural Jobs Summit convened by the Association of Washington Business. The map above shows too much red – job losses – in rural Washington counties. Daily Yonder reporters Tim Marena and Bill Bishop write,

The map shows job gains across most regions of the United States. Notable exceptions to that rule are the northern Great Plains, the rural Pacific Northwest, and the western half of the Mississippi Delta.

In addition to the employment gap, there’s a substantial income gap between urban and rural areas.

In rural areas, median income in 2017 was $47,563. Metropolitan median income was $64,265, more than a third higher than rural incomes. (Note: Those figures are not adjusted for regional differences in the cost of living.)

The next AWB Rural Jobs Summit will be November 8 and 9 at Lower Columbia College, Longview.