The Daily Yonder offers a mixed analysis of rural employment. Despite some rural gains, the gap between urban and rural communities continues to widen, as the graph below shows. 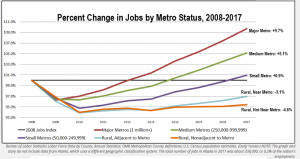 New annual job numbers from the Bureau of Labor Statistics confirm that the effects of the Great Recession went deeper and have lasted longer in rural America than they did in the rest of the nation.

The 2017 annual jobs report shows that rural counties (defined as nonmetropolitan) still haven’t gotten back to levels of employment they saw in 2008 at the beginning of the recession.

Meanwhile, the nation’s largest metropolitan areas (those with populations of 1 million or more) climbed out of their job deficit by 2012. In 2017 they had 10% more jobs than they did in 2008. That’s an increase of 7.8 million jobs. (Major metropolitan counties are shown in the red line in the graph …)

We wrote of the possible beginnings of a rural comeback earlier this year. In a previous article, Marema wrote of how the industrial mix affected rural jobs.

We hear a lot about the decline of rural manufacturing, but counties where that industry predominates actually fared better than the rest. Those counties lost about 2% of their overall employment for the period, dropping by approximately 100,000 jobs to 4.6 million from 2008 to 2016. Manufacturing counties also had more jobs than any other type of county except nonspecialized ones. One out of every four rural jobs is in a county dominated by manufacturing. Mining-dominated counties account for 7% of all nonmetropolitan employment.

Counties where farming predominated (the red line in the top graph) held steadiest in employment throughout the recession and recovery. But farming counties don’t account for a lot of jobs compared to other types of counties.

This analysis is consistent with a USDA report underscoring the importance of manufacturing to rural economies, cited here. In our post on the report, we commented,

Promoting increased manufacturing investment and job creation by providing tax relief should again be on the agenda when lawmakers return next year. It’s an issue that will not go away.