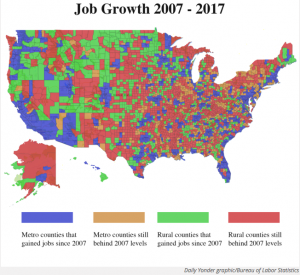 The number of rural Americans living in poverty has skyrocketed in recent years amidst an economic evolution that has cost hundreds of thousands of manufacturing and mining jobs.

Urban poverty has also increased, but the story points out a significant difference.

After a decade of growth during the 1990s, the data show rural America has been effectively experiencing its own recession for far longer than the nation as a whole.

Rural areas with low populations are far more likely to be reliant on a single industry than their larger metropolitan cousins. The dominant industries in many of those rural regions — manufacturing in the Midwest, resource extraction in Appalachia — have been experiencing long-term declines as automation increases and as energy consumption evolves.

The decline in employment opportunities has led to a spiral as younger workers leave for metropolitan opportunities, exacerbating the problems of the small communities they’ve left behind. The generational implications are clear.

The Daily Yonder, from which the map at the top of this post is taken, further examines the issue.

Ten years after the beginning of the great economic depression in December 2007, rural America still hasn’t recovered. Rural counties count 770,000 fewer jobs in October 2017 than they had in 2007, according to the Bureau of Labor Statistics.

Falling unemployment rates in rural communities should also be taken with a caution.

Unemployment rates in rural and urban America were low in October of this year, averaging at or below four percent. Those rates are lower than in 2007, when unemployment rates were at or above 4.5 percent.

Rural unemployment rates have dropped, however, not because there are more jobs, but because the total workforce has shrunk. Since 2007, the total number of people working or looking for a job in rural counties has dropped by nearly 1.1 million people.

While the map shows that Washington’s rural communities are faring better than parts of the rural Midwest, Appalachia and the southeast, the economic divide remains real here. Efforts like the AWB Rural Jobs Summit are commendable responses to a challenge we cannot ignore.