Joel Kotkin assesses a report from the San Diego Economic Development Council that compares San Diego’s software industry with major tech hubs around the country. We liked this graphic from the report. 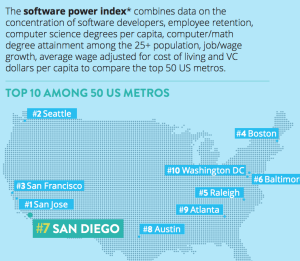 But perhaps the most critical advantage is to those areas which have both high concentrations of tech jobs and also rapid growth. These areas would seem best positioned to advance in the coming years and include some of the study’s software superstars. Austin for example has expanded tech employment since 2001 by 89% and boosted its location quotient (the ratio of local share to national share of jobs in a sector) for tech employment from 2.14 to 2.32. Raleigh, San Francisco and Seattle have also expanded both in relative and absolute tech employment.

What’s the future look like? He points to three outcomes for major metros:

First, there are the clear winners — places like San Francisco, Silicon Valley, Raleigh, Seattle, Austin — which continue to add both new jobs and boost their share of tech and software employment. Areas like these enjoy both momentum and critical mass, which all but guarantees a prosperous future for these metro areas as software comes to dominate more of our lives, and other industries.

The second group, which includes key players like San Diego and Boston, will be fighting to hold onto their positions. They have experienced some growth, but their share of tech jobs has been falling and they may not have the momentum to make up for other disadvantages such as high housing prices and taxes…

Third, and most troubling, will be those places like New York and Los Angeles where the tech economy is often hailed as a savior, but does not seem, in relative terms, to be living up to the feverish advertising.

While the San Diego report, like most analyses of the tech geography, focuses on metro areas, a cover story in the Spring 2016 issue of Washington Business, the quarterly magazine of the Association of Washington Business, explores the significant positive impact of the tech sector on the Washington state economy. The metro Puget Sound region dominates, as expected, but the innovation cluster’s reach is broad, with tech employment distributed across all counties in the state. Fourteen counties have more than 1,000 people employed in the sector.

The strength of the sector in the state, as Kotkin writes, means Washington can continue to be a “clear winner.” The industry’s growth means expanded opportunities for Washingtonians. Educating the next generation is critical to making sure they’re prepared to seize the opportunities. As we wrote in our foundation report,

In the technology-driven, globally competitive economy of the 21st century, innovation and efficiency are the keys to continued success. A well-educated workforce is required to enable existing employers to succeed and grow, and to attract new employers to the state.

For individuals, a strong education system is critical to becoming prepared to take advantage of the most exciting and rewarding career opportunities employers have to offer. This is especially true in Washington, which by any measure has one of the most innovation- and technology-driven economies in the world. Washington already has a highly educated workforce. That strength will become even more important for the state in the years ahead. By 2020, estimates are that 70 percent of jobs in Washington will require some form of postsecondary education (compared to 65 percent nationally).

Lawmakers this biennium made great strides in improving education funding, accountability and reform. Next year, the challenge begins again.