Another relatively unsurprising report: The Seattle metro area posted the 11th fastest job growth of major metros, according to an analysis of data by Aaron M. Renn at New Geography.

It was a pretty good year for job growth in a lot of major metros. Here’s how they fared, ranked by percentage job growth. Job totals are in thousands.

Metropolitan Portland also did pretty well, coming in at No. 13. And, as we’ve come to expect, Southern and Sunbelt states posted some good numbers. 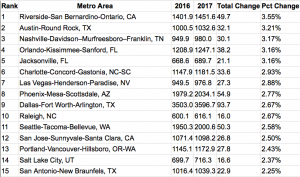