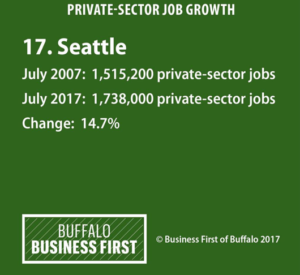 Metro Seattle ranked No.17 nationally in private sector job growth since the great recession, according to data released today by the Bureau of Labor Statistics. The chart above, from the American City Business Journals, shows a 14.7 percent increase.

Austin is far and away the national leader in employment growth. Texas’ capital region ballooned 37.6 percent from 616,700 private-sector jobs in July 2007 to 848,700 last month.

Rounding out the top five are Nashville, San Antonio, Raleigh and Dallas-Fort Worth, all with 10-year growth rates in excess of 21 percent.

At the bottom of the standings are the five major markets that actually have fewer private-sector jobs now than a decade ago: Albuquerque, Virginia Beach-Norfolk, Greensboro, Birmingham and Dayton.

Seattle, notably, is the only top five metro not in Texas or the Southeast.