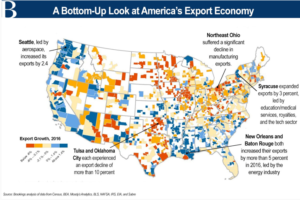 First, the good news. Metro Seattle saw exports increase 2.4 percent in 2016, among the strongest performances in the nation. This according to a new report from Joseph Parilla and Nick Marchio at the Brookings Institution.

As measured by Brookings, King, Pierce and Snohomish counties being metro Seattle ranked sixth among 381 metro areas in the inflation-adjusted value of exports last year. It ranked fourth in exports’ share of GDP. These compare with eighth and ninth in 2003.

But as the report shows, Seattle is an exception, which brings us to Talton’s bad news.

64 percent of metros showed an export slowdown, including 71 of the 100 largest metros (Portland saw a 0.1 percent decline last year).

From the Brooking report (the source of the map above):

Metro areas in the South and West were more likely to experience export growth. Of the 29 large metro areas that expanded their export base in 2016, 25 were located in these regions. Many of the fastest growers specialized in aircraft production (e.g., Seattle, Tucson, and Wichita) or oil and gas (e.g., Baton Rouge and New Orleans).

It’s a complicated story, one that underscores key regional differences.

Ultimately, national exports arise from the collective export performance of the nation’s diverse regional economies and the firms that cluster in them. In 2016, 381 metropolitan areas generated 87 percent of national exports. Reflecting the national decline, total exports within the nation’s metropolitan areas declined by 1.9 percent from 2014 to 2016. The drop in the nation’s 100 largest metropolitan areas was slightly steeper (2.0 percent), even as these areas’ aggregate GDP grew by 1.9 percent. The combination of export decline and broader economic growth meant that, for the first time since 2009, average export intensity—the share of regional GDP generated by exports—dipped below 10 percent in large metro areas.

The overall national decline masks considerable variation among industries. Only 8 of 35 major industries experienced export growth between 2014 and 2016: educational and medical services, management and legal services, commodities, travel and tourism, and the technology sector.

Washington, one of the most trade-dependent states, remains sensitive to trade policy. Talton points out one example:

“The growing weight of services exports — management, legal, technology, education, and medical—also must be recognized and central to a Trump administration ‘Made in America’ agenda,” they write.

Of course, opening service markets was a key goal of the Trans-Pacific Partnership.

The Seattle Times editorial provides another:

When the Ex-Im Bank was functional back in 2015, about 15 percent of Boeing’s 750 jet deliveries involved financing guarantees by the Ex-Im Bank. At the peak of the financial crisis, when lending seized up, that figure was about 30 percent. In the Ex-Im’s starved state, it now has played a role in just 4 percent of Boeing’s deals — even as its competitor Airbus can tap three European loan-guarantee programs.

The export strength of metro Seattle and Washington state continues to be a good news story … and one that must be vigilantly protected.