The on-the-ground experience in Seattle – lots of cranes, futuristic new buildings, more everything – received another dose of empirical verification. The Brookings Institution has released a study (press release) finding that Seattle is one of four metro areas in the nation that have posted the largest gains in job density.

The Seattle Times business columnist writes of the study.

In addition to the blockbuster news that Apple will be expanding here with a “key engineering hub” in South Lake Union, a new study shows that Seattle is one of the four metros in America with the greatest increase in job density. The other “superstar cities” in this regard are New York, Chicago and San Francisco.

It gets better. The nation’s density of information tech jobs increased by 60 percent between 2004 and 2015. San Francisco, New York and Seattle accounted for virtually all of this rise.

The Brookings authors (full report) say of the importance of job density,

Density increases firms’ proximity to one another,permitting them to share more inputs and more easily trade their products and services. In denser areas, more intermediate inputs are more readily available.6 Similar firms will have access to largerpools of specialized labor and suppliers. Proximity also helps lower the cost of transporting goods and providing services, leading to more trade.

They also discuss research that has “demonstrated the important role that density plays in fostering economic growth, social capital and civic engagement, and healthier, more sustainable communities.” They acknowledge that making that happen requires additional factors: A primary focus of the research is identifying strategies to promote densification that works, that advances the positive outcomes identified. They write,

Strengthened by policies that encourage investment in existing development areas rather than low densitylocales and greenfield sites, such concentrations do not equate to economically dynamiccommunities—but they seem increasinglyrequisite for creating them. When coupled
with good design and programming driven by the vision and values of local stakeholders, density not only promotes economic and socialbenefits but also addresses urgent fiscal and environmental challenges facing many U.S. cities and metropolitan regions today.

Hence this report, which aims to help leaders understand how, and how much, changing demands for place are influencing the clusteringof jobs both across and within metropolitanareas. The findings suggest a need for them toembrace policies and investment strategies that advance more concentrated growth patterns, while also supporting transformative placemaking solutions that help such dense places become vibrant communities where businesses and workers thrive.

Washington, through the Growth Management Act and other pro-density regulation, as explicitly embraced such policies, though not without controversy and unintended consequences. Setting those issues, let’s look at Seattle’s job density record. The following graph from the study tells part of the story. 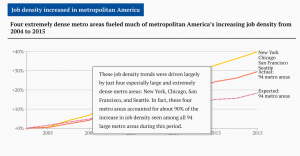 The metro areas of New York, Chicago, San Francisco, and Seattle account for almost 90% of the increase in job density seen among all 94 large metroareas from 2004 to 2015. The outsized influenceof these four metro areas stems from their size, density, and growth. Together, they comprise about 20% of private, non-administrative jobs in metropolitan America and a slightly larger share of its job growth during this period. Their job density increased from an average of 65,813 to92,000 jobs per square mile, or by 40%.

This suggests that the narrative of metro job growth is more unevenly distributed than is commonly thought. (And, of course, we again mention that 10 counties here have unemployment rates of more than 7.1 percent while King County experiences an almost unbelievable unemployment rate of  2.8 percent.)

…jobs in the knowledge-intensive information sector saw a 60% increase in density across all 94 metros taken together, but this was driven largely by the increasing concentration of information jobs in the especially large and dense metro areas of San Francisco, New York, and Seattle. Indeed, the information sector’s job density increased

in just 33 (35%) of metro areas, a group whichalso included fast-growing tech hot spots such
as Austin, Greenville, S.C., Indianapolis, and Nashville, Tenn. Moreover, in almost all these metro areas those increases were greater-than- expected, indicating that in the metro areas where the information sector is adding jobs, it is disproportionately adding them to already-dense parts of the metro area.

A major conclusion reached by the authors.