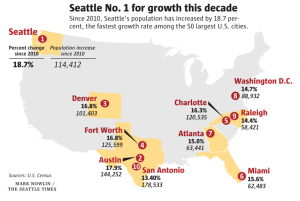 The Seattle Times reports on what Puget Sound residents know, perhaps, all too well. The city has experienced phenomenal growth in the last 10 years. FYI Guy Gene Balk writes,

The U.S. Census Bureau released new population figures for U.S. cities on Thursday, and they show that Seattle has toppled Austin, Texas, to become the nation’s fastest-growing big city this decade.

Add up all the population gains since 2010 and Seattle has grown by a staggering 18.7 percent, which ranks as the fastest rate of growth among the 50 largest U.S. cities.

Adding 114,000 residents, of course, has had the predictable effect of driving up rents and housing prices. And, while the 18.7 percent growth rate tops the nation, as the ST map above shows, the largest population gainers were all in Texas: San Antonio, Austin and Fort Worth.

Stateline reports the flight from the coasts, which we tend to think of as being the Pacific Coast from Washington to California and the Atlantic Coast down to about D.C. (at least, the Carolinas, Georgia and Florida don’t show the same outmigration, not yet).

The high cost of housing seemed to sap Americans’ taste for coastal cities last year as cities in Texas and Arizona gained more population than New York City or Los Angeles for the first time in a decade, according to census population estimates released today.

“What started as a promising decade for big cities is starting to crumble a little bit for them,” said William Frey, a demographer at the Brookings Institution, in an email. “The Great Recession put the brakes on dispersal to small metro areas, suburbs and the Sun Belt; but those trends are beginning to resume again.”

It’s not just a coastal thing, either, Stateline suggestions. The high cost of metro living may lead to a renaissance for small and mid-size cities.

Opportunity as well as affordability may be spreading to smaller towns, recent county population data shows. Cities with between 20,000 and 30,000 residents saw increasing rates of population growth for the third straight year, adding 104,000 people as a group from 2016 to 2017.

That last statement gives us a hook for yet another reference to that possible source of Seattle outmigration, the $275 head tax. The Lens reports on a rural development idea being promoted by a state senator.

Sen. Steve O’Ban has proposed a $275 business and occupation (B&O) tax credit to employers for each new qualifying job they create in counties struggling the most, beginning in July 2019.

“Washington shouldn’t lose jobs because our largest city’s tax policy punishes job growth. If employers want to relocate, they should know that other counties are business-friendly and welcoming,” said O’Ban, R-University Place.

…“This tax credit – or ‘head tax’ credit – will do the opposite of Seattle’s job tax. It will reward, rather than place a bounty on, employers for hiring more Washingtonians. And it requires companies to pay above-average wages to qualify.”