While businesses have made known their disappointment (mild word) with Seattle’s new head tax, we hadn’t previously seen the results of how voters perceived the tax. According to a poll conducted for KIRO-TV, in adopting the tax the council was going against the wishes of a majority of Seattle voters. 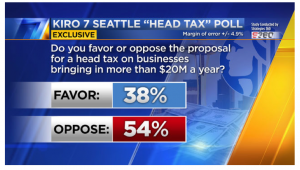 From the KIRO story,

On behalf of KIRO-TV, Strategies 360 conducted a live telephone survey of 400 registered voters in the city of Seattle, WA.

Interviews were conducted May 11-13, 2018.  A combination of landline and mobile phones were called to ensure greater coverage of the population sampled.

So the polling concluded Sunday, before the council adopted the “how is that a compromise?” compromise, dropping the annual  tax from $500 per employee to $275 per employee.

Seattle voters also appear to have reached their limits when it comes to trusting city government to handle tax dollars effectively.

Now we have the state Senate Republican leader advancing talks of state preemption of the city head tax, which he believes is not specifically authorized by state law. And the Seattle Times is editorializing in favor of repeal by voter initiative. If Seattle voters are so inclined, the KIRO 7 poll may give them some encouragement.