This won’t surprise you. A new report from the Council for Community and Economic Research (C2ER)  finds that the cost of living in Seattle is fifth highest among U.S. cities, training only Manhattan (NYC), San Francisco, Honolulu, and Brooklyn (NYC). Apparently the five boroughs are treated as separate metros. Given their size, that makes sense. A more conventional breakdown, though, would move Seattle to fourth place, while most likely keeping New York City at the top. 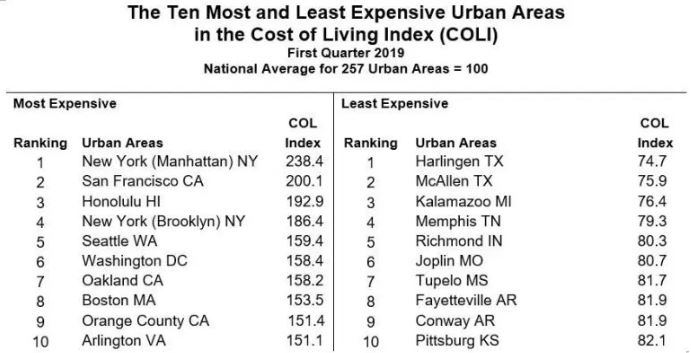 The C2ER table above shows the 10 most and 10 least expensive cities.  The C2ER rankings are based on cost of living data collected for 257 metro areas.

The Cost of Living Index measures regional differences in the cost of consumer goods and services, excluding taxes and non-consumer expenditures, for professional and managerial households in the top income quintile. It is based on more than 90,000 prices covering 60 different items for which prices are collected quarterly by chambers of commerce, economic development organizations, and university applied economic centers in each participating urban area. Small differences should not be interpreted as showing a measurable difference.

Yahoo Finance pointed out that housing was the biggest expense for those living in the top five cities, forming 29.34 percent of the overall composite index of the cost of living.

Earlier this year, Seattle-based Zillow ranked the city as the second toughest housing market in the U.S. for first-time buyers.

After yesterday’s Seattle City Council primary, this report may give candidates something more to discuss.