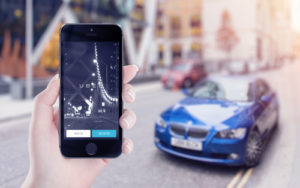 Seattle’s unprecedented law permitting Uber and Lyft drivers to form a union has been put on hold. The Seattle Times reports,

A federal judge in Seattle has temporarily blocked the city’s first-in-the-nation law that attempts to allow Uber, Lyft and taxi drivers to unionize.

The law, passed in 2015, had been scheduled to go into effect this week.

Seattle’s law allows Uber, Lyft and taxi drivers — who are categorized as independent contractors, not employees — to form a union and collectively bargain for things like pay, benefits and working conditions.

The controversial law sparked a challenge from the U.S. Chamber of Commerce. Last August, as we wrote, U.S. District Court Judge Robert Lasnik told the Chamber that their suit was premature, that they didn’t have standing because no harm had yet been done. In granting yesterday’s injunction, Lasnik reviewed a number of issues, including the public interest in the case, his comments on which we quote from below.

The attempt by the City of Seattle to bring some measure of regulation to the rideshare industry is clearly based on reasonable public policy concerns. But the public not only has an interest in safe and reliable transportation networks, but also in the enforcement of the laws Congress has passed. The Court is cognizant of the fact that the public is interested in this litigation and its outcome: that the issues raised here may well impact not only for-hire transportation, but also other sectors of the economy that have come to rely heavily on independent contractors instead of employees.

The issues raised in this litigation are novel, they are complex, and they reside at the intersection of nation al policies that have been decades in the making. The public will be well-served by maintaining the status quo while the issues are given careful judicial consideration as to whether the City’s well-meaning Ordinance can survive the scrutiny our laws require.

For all of the foregoing reasons, the Chamber’s motion for preliminary injunctive relief is GRANTED.

The Chamber’s lawsuit argues that drivers are competitors, not co-workers, and that allowing them to unionize is anti-competitive and amounts to “forming a cartel.”

Seattle argues that although contractors are not covered by federal unionization laws, the federal government left state and local governments free to regulate a union of independent contractors.

The first three are allowed to unionize under various state laws.

Geek Wire notes Lasnik emphasizes that the pause should not be taken as a prediction of his final decision.

The court is careful to explain that today’s ruling is just a pause to consider the issues and doesn’t indicate which side will win out in the end.

“The Court emphasizes that this Order should not be read as a harbinger of what the ultimate decision in this case will be when all dispositive motions are fully briefed and considered. The plaintiffs have raised serious questions that deserve careful, rigorous judicial attention, not a fast-tracked rush to judgment based on a date that has no extrinsic importance,” the ruling says.

As Geek Wire reports, the U.S. Chamber’s involvement underscores how seriously businesses across the country are taking Seattle’s efforts.

In addition to violating federal labor laws, the chamber also argues the ordinance could encourage other cities to enact similar legislation, creating a patchwork of inconsistent laws.

“Seattle’s unprecedented attempt to permit independent contractors to organize a union is clearly inconsistent with federal antitrust and labor laws,” a U.S. Chamber spokesperson said. “If adopted more broadly, Seattle’s approach would lead to a morass of inconsistent state and local regulations that would stifle innovation and undermine economic growth.”

Last June we wrote about how the “gig economy” posed challenges and opportunities for ambitious regulators and that Seattle was setting the pace. Our post then linked to some national discussion about the pending regulations and their implications.

In our foundation report, we noted the proliferation of local labor laws, including minimum wage and paid sick leave. They can be problematic.

In addition to the absolute costs of these measures, and the challenge they create in competing with other employers not subject to the same mandates, local governments’ wage and benefit regulations create compliance problems for employers operating in multiple jurisdictions. They also create difficulties as employers look to align their human resource policies among cities with different mandates.

This week, Seattle added a new layer of labor policy regulation, becoming the first city in the nation to pass an ordinance allowing for-hire drivers to unionize.

Regardless of how Judge Lasnik rules in the pending case, we can be certain this issue will be around for a while.