Stateline just produced an analysis of metropolitan job growth since the recession. Follow the link to the interactive map. The screenshot below tells the Seattle story. 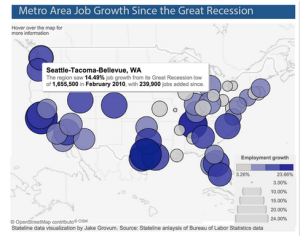 n a dozen metro areas, employment has grown more than 15 percent since its lowest point of the Great Recession. Among the 50 most populous metro areas, the average job growth rate is about 11 percent.

Seattle’s 14.49 percent growth just misses the 15 percent cut, but is well above the 11 percent average. More from Stateline:

Two metro areas stand out as the strongest examples of job growth: San Jose, California, and Austin, Texas, both of which have seen more than 22 percent employment growth since their low points in mid-2009.

Of the top five, two are in California and two are in Texas, both states that have enjoyed a strong statewide job growth. Nashville, Tennessee, posted the third best job growth, 19.3 percent, in a state that has had relatively sluggish employment gains, according to Pew.

Earlier, we noted the strength of “creative economies,” a category in which Seattle came in fourth. Creative economies would seem to be start-up friendly. Seattle Times business columnist, Jon Talton, reviews a Kauffman Foundation study that suggests a more nuanced analysis might be in order. The findings are surprising.

I present to you the top state for startups: Montana.

Before you snicker, this is coming from the respectedKauffman Foundation’snew report on state and metro startup activity. Following the Big Sky State are Wyoming, North Dakota, Colorado and Vermont. Washington ranks 38, down from 34 in 2014…

Among metropolitan areas, Seattle came in at only No. 16…

Who’s at the top?

Talton’s column points out some methodological hurdles in identifying entrepreneurship and the effects of the “fracking boom.” But,

On the other hand, most of the leading startup cities are genuine competitors and must be taken seriously.

And he notes, as we have previously,

The report may offer more serious fodder for the state at large considering how many counties still have very high unemployment rates.

Seattle continues to do well, start-up rankings aside. Our challenge continues to be extending the culture of opportunity statewide. Our roadmap provides a useful guide to policymakers.