The Seattle metro area has long ranked near the top in technology and STEM career opportunities and performance. (We looked at this in our research report.) Further confirmation of the region’s tech status comes in a new study ranking Seattle seventh in the nation for technology and STEM-related job growth. The analysis by Mark Schill of the Praxis Strategy Group creates a growth index that

analyzed employment data from the nation’s 52 largest metropolitan statistical areas from 2004 to 2014. He looked at the change in employment over that timespan in companies in industries we associate with technology, such as software, engineering and computer programming services. (Note that this includes everyone at these companies, such as non-tech employees like janitors and receptionists). He also looked at the change in the numbers of workers in other industries who are classified as having STEM occupations (science, technology, engineering and mathematics-related jobs). 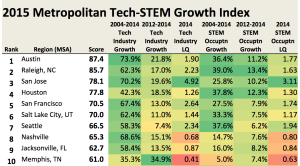 Few surprises in the top regions – Austin, Raleigh, San Jose, Houston would be on most people’s list – though Nashville, Jackson and Memphis might not be intuitive.

Reporting on the research, Joel Kotkin points out that

Silicon Valley’s thick concentration of titans like Intel, Apple, Oracle, Google and Facebook has created an innovative ecosystem, which, as Pando Daily’s Michael Carney describes, supports a “systematic irrationality and a feedback loop” that encourages many tech entrepreneurs to turn down the easy early exit of selling out to a bigger company and make the commitment to grind for a decade or more in the hopes of joining the afore-mentioned standouts as a massive success.

No other area apart from Seattle (No. 7 on our list) comes close in this regard to nurturing tech giants.

While that stickiness preserves the cluster in top tech towns, long-term dominance is not a given for most cities at the top of the list.

…the reality is that future tech growth is more likely to be created by the less sexy business services sectors than by Internet media or software publishers. In the last decade three often-ignored industries — engineering services, systems design and custom programming – added nearly 750,000 jobs, while software providers and Internet properties added less than 200,000. The decentralizing force of these boring sectors is what’s driving growth in the second- and third-tier tech cities.

But despite these trends, don’t expect the landscape of American technology, particularly at the high end, to change dramatically in the near future. Inertia is a powerful force, as is the enormous concentration of venture funds and expertise around the Bay Area. But if no one area can hope to challenge Silicon Valley’s lead position, it is likely tech growth will continue to flow to other areas that could collectively take the tech capital of the world down a notch or two.

Metro Seattle is well-positioned, but should not become complacent.

In other employment news, Washington had a better March than most of the country. And its status as one of the nation’s most trade-dependent states remains secure.