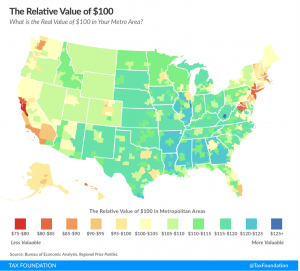 The purchasing power of a dollar varies dramatically across American metro areas, reports the Tax Foundation. The Seattle-Tacoma-Bellevue metro, the group says, ranks as the 15th most expensive. TF uses new data released by the federal government to conduct its analysis.

In May, the Bureau of Economic Analysis (BEA) released its annual data showing the differences in purchasing power across American metropolitan and non-metropolitan areas in 2018. This data compares how much $100 can buy in different regions and metropolitan areas across the country, which can have a significant effect on the relative impact of different economic and tax policies.

The San Francisco Bay Area was the most expensive metropolitan region in 2018, where $100 would buy goods and services that would cost just $75.99 in a metropolitan area at the national average price level. Put another way, residents of the San Francisco-Oakland-Hayward area had, at least in terms of purchasing power, about a 25 percent lower standard of living than their nominal incomes alone may suggest.

In the Seattle metro area, that same $100 would buy $88.57 worth of goods and services. TF analyst Garrett Watson explains,

Raise any questions about the comparative value of a $15 minimum wage or the ability of different markets to absorb it?