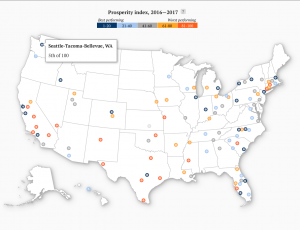 The Seattle regional economy scores generally well on the 2019 Metro Monitor produced by the Brookings Institution. The report takes the concept of economic success and breaks it down to several critical components.

The Metro Monitor aims to deepen understanding of economic success by broadening its definition, and measuring it at the regional scale. This year’s edition explores trends in growth, prosperity, and inclusion (including by race) for the 100 largest U.S. metro areas, both for the latest year of complete data (2016 to 2017), and across a decade period (2007 to 2017) that illuminates how metro economies are performing today compared to before the Great Recession.

The map above shows the one year rankings on prosperity index, on which the Seattle region ranks fifth. Spokane comes in at No. 66 out of the 100. Brookings report helpfully provides metro tables summarizing rankings on each of the indexes at the end of the brief report.

Not surprisingly, Seattle-Tacoma-Bellevue performed well in most areas:

• Fifth nationally in prosperity, including standard of living, productivity and average annual wage, from 2016 to 2017. For the decade, we ranked No. 2.

• Ninth in growth, including of jobs at young firms. No. 11 for the decade.

• Seventh in inclusion, changes in employment and income distributed among individuals. For the decade, we ranked 34th. We topped the annual ranking for the subset of percentage change in median wages, and were No. 7 for the decade.

Less happily, Seattle-Tacoma-Bellevue ranked 57th for economic inclusion by race from 2016 to 2017, and 67th for the decade. The change in the white/non-white income gap placed metro Seattle at 82nd among 100 metros nationally. Only Portland posted a statistically significant shrinking in measures of racial gaps between 2016 and 2017.

As usual with these reports, there’s a lot of useful information. Enjoy.