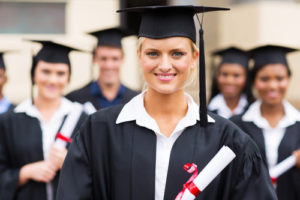 Keep statewide tests as a graduation requirement. That’s the message of a persuasive editorial in the Seattle Times.

ALTHOUGH only 13 states still require high school students to pass exams to earn their diploma, Washington has stayed the course to make sure high school diplomas continue to mean something. Lawmakers should hold onto that ideal and defeat House Bill 1046, which would make the English, math and science exams no longer count for graduation.

Washington shouldn’t let its young people down by lowering the standards and failing to give them the education they need to succeed in life.

Washington’s high school diploma must continue to mean something to employers, colleges and training programs if students are going to use that piece of paper as a ticket to a meaningful career.

We’ve written about this before, most recently here.

The erosion of accountability and the consequences of such erosion have concerned us for some time. In our foundation report we wrote,

It’s imperative that the state continue to make improvements focused on better outcomes for students, particularly as it assumes the responsibility for providing a much higher than typical proportion of funding for the K-12 system.

When standards slip, it becomes more difficult to catch up. And, we’re seeing, easier to decide that catching up just isn’t worth the effort, leaving too many too far behind.

Accountability. Standards. Performance. They all matter.

Also today, we note a good discussion in Education Next featuring three authorities on the importance of accountability. In particular, we want to call attention to these comments by Morgan S. Polikoff, associate professor of education at the University of Southern California’s Rossier School of Education.

Try to think of an education policy that 1) has been shown, in dozens of studies across multiple decades, to positively affect student outcomes; 2) has the overwhelming support of parents and voters; 3) reinforces many other policies and facilitates quality research; and 4) has been used widely at the district, state, and national levels for decades or more.

You might be thinking that such a policy doesn’t exist, and if it did, we’d surely want to keep it around. But the truth is precisely the opposite. Such a policy does exist—it’s called school accountability…

He reviews recent history, including No Child Left Behind and the Every Student Succeeds Act, and the shifting support for accountability measures. Then, he concludes,

Over the last several decades, we have made real, if incremental, progress in education. Test scores on the National Assessment of Educational Progress are up for every student subgroup (even accounting for the downward blip in 2015), and graduation rates are, too. Accountability systems have worked well with other reforms—such as effective choice policies, the expansion of early-childhood-education and other school-readiness programs, and efforts to improve the teaching force through evaluation and tenure reform—to improve education for children around the country. There is simply no reason to think that abandoning accountability at this point would be an effective strategy. The coming years will see new and creative uses of accountability in states and districts. We must encourage and study this innovation if we are to continue improving America’s public schools.

Another authority writing in the Education Next forum is Kevin Huffman, former Tennessee commissioner of education. He acknowledges the challenges of designing effective standards and holding schools and educators to account. Still, he writes,

Toning down the rhetoric of accountability—particularly when the realities didn’t match the heated language—makes sense, as long as we don’t lose our resolve to use student results as a barometer of whether educators are succeeding.

Because, while teachers and parents may have grown tired of accountability, here’s the rub: test-based accountability, even executed poorly, works. From 1999 to 2011, during the heyday of NCLB and its state-level predecessors, overall student scores improved on the National Assessment of Educational Progress (NAEP) in both reading and math (see Figure 1). Furthermore, scores rose faster for African American and Hispanic students, narrowing achievement gaps. State bubble tests may have been weak, the over-fixation on tests in some schools may have been real, but it is a flat-out fact that kids—particularly low-income and minority kids—got a better education.

Washington has, as the Seattle Times editorial notes, stayed the course, and for good reason. Accountability matters. And it works. That’s a good thing.