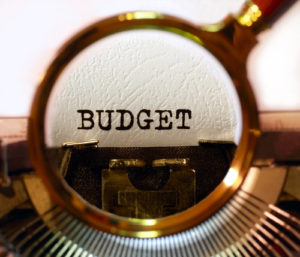 Senate Republicans on Tuesday released a $43 billion two-year budget that puts an additional $1.8 billion toward education, paid for, in part, by a statewide property tax that ultimately would replace local district levies.

The budget plan — which spends about $5 billion more than the current two-year budget — also relies on about $200 million in transfers from other accounts and spending cuts in some state programs. The plan was to move quickly to the Senate Ways and Means Committee, which was to hold a public hearing Tuesday, and the full chamber could vote on it as early as Thursday.

Of the changes in property tax levy associated with the plan, the AP writes,

Republican Sen. John Braun, the chamber’s key budget writer, said that 83 percent of taxpayers would have lower property tax rates under the plan.

Collective bargaining agreements, as expected, are not funded in the plan.

From the highlights of the Senate Republican plan,

The proposed Senate Chair budget for the 2017-19 biennium spends a total of $43.0 billion Near General- State and Opportunity Pathways and represents approximately a $5 billion increase from current spending levels in the 2015-17 biennium (after adjusting for the 2017 supplemental changes).

Pursuant to the four year balanced budget methodology, the projected spending level for the 2019-21 biennium is $50.0 billion. This is the net impact after making both policy level additions and achieving savings from current law requirements.

With respect to revenues,

The largest resource item is associated with the K-12 legislation that converts to a pupil guarantee funding model and imposes a new local effort levy by the state on behalf of school districts at a uniform rate. Based on the assumed tax rates, the new local effort levy is expected to generate $1.5 billion in the 2017-19 biennium and $4 billion in the 2019-21 biennium.

The Senate budget also assumes legislation that would appropriate $700 million from the Budget Stabilization Account for contributions toward the unfunded liability in the PERS 1 retirement system. As a result of the actuarial savings associated with this earlier payment, a surcharge on all employers based on the difference in lower contribution rates is imposed. This is expected to generate $56 million in the 2017-19 biennium and $171 million in the 2019-21 biennium. 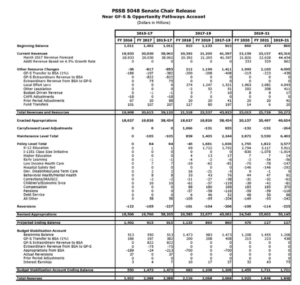 The House will release its counteroffer next week.