The Senate Ways and Means Committee yesterday pass SB 5063, which the bill dubs the Kids First Act. The measure sets aside 2/3 of new revenues for education funding. From the bill report:

From July 1, 2017, through June 30, 2027, two-thirds of any expenditures of new revenue to the state general fund and related funds must be made for state education programs, including K-12 education, early learning programs, and higher education.

The following chart, from Ways and Means handouts, shows the projected impact. 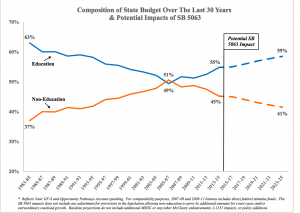 As the chart shows, non-education funding had been on an upward trajectory from the early 1980s to the 2005-2007 biennium. The recession slowed growth in everything and the education share began to rise, particularly in the last biennium.

The proposal, which was also introduced in the last legislative session, represents an attempt to address the state Supreme Court’s McCleary mandate by funding education first.