The official revenue forecast was adopted yesterday by the Economic and Revenue Forecast Council.  It contains a little good news for budget writers. Here’s the key slide: 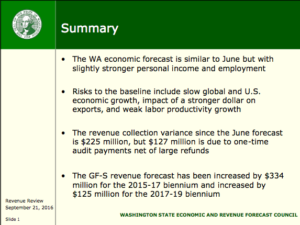 It’s up $334 million for the balance of this biennium and $125 million for the next. Sure, it’s not providing the billions of new revenues some say will be required to handle school funding, public employee collective bargaining agreements, and other likely demands on the budget. But it’s growth and further testimony to the strength of the state economy.

And overall the trend looks good, as ERFC reports.

“Today’s increase in our revenue forecast is only modest, but it’s great to see our state’s economy continuing to move in the right direction,” David Schumacher, director of the Office of Financial Management, said in a news release. “Certainly, having nearly $2 billion in reserves will be a big help given the challenges we will face in the next biennium to fund education and meet other critical needs.”

The next forecast will be released in November, forming the basis for the governor’s budget proposal.