Today’s official revenue forecast increases projections for the 2019-2021 biennium by $2.1 billion and $2.2 billion for 2021-2023. That effectively adds back nearly half of the $8.8 billion reduction in expectations made in the June forecast. The increase was widely expected following three consecutive months of revenue collections coming in well above the June projections. 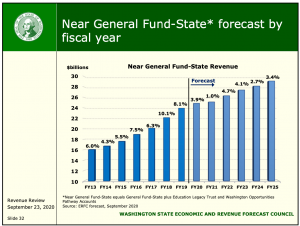 As the last bullet makes clear, the state still faces a budget challenge, but one that has become more manageable. Again, the ERFC cites considerable uncertainty regarding the projections.

There’s always a lot of good information in the ERFC presentations. We recommend it. Here’s the concluding slide. 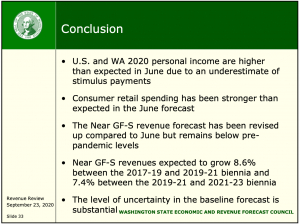