The numbers are startling. Aaron Renn writes of a new article by Richard Florida. He quotes from it:

Tech-centric Seattle shows up among the top ten, but the dominance of the major sectors means that if you’re out of the top five, you just don’t account for much of the action. 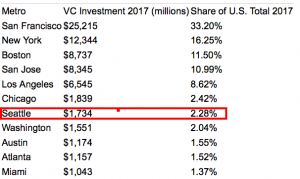 In Florida’s CityLab article, he explains the data.

The data cover venture capital investment in 45 metros over the period 2006 to 2017. (Pitchbook provided us with an even more detailed spreadsheet of the data than was originally organized for and published by the National Venture Capital Association.)

Other established tech hubs have failed to keep pace with the growth of leading metros, San Francisco and New York. Seattle, remarkably, saw virtually no growth in its venture capital over the past decade, while both Silicon Valley and Washington, D.C., saw growth of roughly 60 percent, a far cry from the 400-plus percent growth in San Francisco and 500-plus percent growth in New York. And while “rise of the rest” metros like Charlotte, Nashville, Pittsburgh, Portland, Dayton, Huntsville, Tampa, San Antonio, St. Louis, Cincinnati, andSacramento, did see considerable growth in venture capital investment in their startups, together, they accounted for less than three percent of U.S. venture capital investment in 2017. (Emphasis added.)

What’s all this signify?

Yet, as he writes, Seattle “remarkably” lagged in growth. And there’s this.