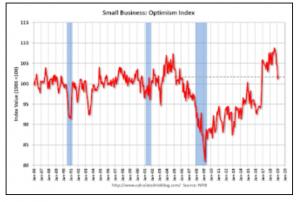 The National Federation of Independent Business has released its February Small Business Optimism Index. The numbers are little changed.

The NFIB Small Business Optimism Index improved modestly in February, increasing 0.5 points to 101.7. Views about future business conditions and the current period as a good time to expand improved as did plans to make capital outlays.  Earnings trends weakened, as a million laid off workers and others affected by the shutdown cut back on spending. The loss of sales falls right to the bottom line. Worker compensation and selling prices were lower in February than they were in January, but job openings rebounded remaining at historically high levels. The Uncertainty Index fell 1 point to 85, a small decline but still showing a lot of residual uncertainty from the government shutdown.

At Calculated Risk (from which the above graph is taken), Bill McBride says,

Most of this survey is noise, but there is some information, especially on the labor market and the “Single Most Important Problem.”…

Usually small business owners complain about taxes and regulations (currently 2nd and 3rd on the “Single Most Important Problem” list).  However, during the recession, “poor sales” was the top problem. Now the difficulty of finding qualified workers is the top problem.

We’re not as inclined to dismiss the survey’s optimism findings, as we remain concerned about the trend of declining optimism and the tightening of the labor market.

Owners are trying to hold on to the employees they have. Fifty-seven percent reported hiring or trying to hire (up 1 point), but 49 percent reported few or no qualified applicants for the positions they were trying to fill (unchanged). Twenty-two percent of owners cited the difficulty of finding qualified workers as their Single Most Important Business Problem, only 3 points below the record high. Thirty-seven percent of all owners reported job openings they could not fill in the current period, up 2 points from January and 2 points below the record high.

Challenging times for businesses of all sizes.