If the COVID-19 crisis lasts four months, 65 percent of small retailers say there’s a good chance they’ll be forced to close permanently by the end of the year. Among restaurants and bars, 70 percent expect to go out of business if social-distancing orders last into July.

That’s according to a new survey of nearly 6,000 small-business owners conducted by a team of researchers in partnership with Alignable, an online business networking platform with 4.5 million members. The survey results paint a bleak picture of America’s current small-business ecosystem, in which results find 43 percent of firms are temporarily closed and 40 percent of the workforce, on average, has been laid off or furloughed since late January.

It’s likely that restrictions will ease in the next four weeks, but it’s unclear what the public response will be: Will customers flock to restaurants, shows, shopping malls as they did before. There will undoubtedly be a lag, stretching out the impact even after the lockdown’s phased-in implementation. This chart from the story shows how different sectors are affected. 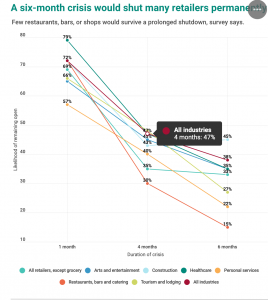 Although the federal relief legislation included funding for small business, many owners are skeptical.

The survey data also shed light on small business owners’ perceptions of the CARES Act. Through the Paycheck Protection Program, part of the federal government’s $2 trillion economic relief package, small businesses can apply for low-interest loans, all or most of which will be forgiven, based on amounts spent on wages, rent, and utilities.

Upon learning the details of the PPP loans, 85 percent of respondents reported optimism about their chances of surviving the crisis. However, only 70 percent of them expressed interest in pursuing such government subsidies. Cullen, an assistant professor at HBS who researches labor market inequality, was surprised that the interest number wasn’t higher “considering the offer on the table.”

“These are very generous terms,” she says. “It’s not free money necessarily, but it’s very close to that… The low rates of up-take, seen in that light, are really a call to action to figure out what it is that’s preventing some businesses from pursuing this federal help.”

The article is worth reading for additional policy insight.

One of the most celebrated pieces of the massive $2.3 trillion coronavirus relief package that’s just over 2 weeks old is on life support with no deal in sight to resuscitate it.

According to the latest projections, the Small Business Administration’s $349 billion appropriation for loans to eligible firms, which are forgiven if they use the money to keep workers on their payrolls, will run out of money by Friday.

Negotiations, messy as always, are ongoing in Congress.

Seattle has picked the first 250 small businesses to receive coronavirus relief grants of $10,000 each from the city. Most of the grantees are restaurants and cafes, barbershops and hair salons.

The city held a lottery to select the companies, because nearly 9,000 applied, according to Mayor Jenny Durkan’s office, underscoring the havoc the pandemic has wreaked among neighborhood businesses. The city intends to offer additional grants at a later date, a news release said Monday.

To support the small businesses during Gov. Jay Inslee’s ban on gatherings and non-essential business activities, Seattle is using federal Community Development Block Grant funds that previously had been allocated to other purposes, such as loans intended to help create affordable housing.