The Washington Research Council reports that the latest federal data show state and local taxes here have risen faster than they have in other states.

The U.S. Census Bureau has released state and local government finance data for 2018. In Washington, state and local taxes increased by 10.4 percent over 2017. This includes property taxes, sales and gross receipts taxes, and motor vehicle license taxes. (For other states, it also includes income taxes.)

The WRC breaks the data down into taxes per capita and taxes as a share of personal income (PI), the two standard approaches to measuring the tax burden. On both measures, Washington saw an increase.

The state ranks higher on taxes per capita than on taxes as a share of PI. That’s typical of relatively wealthy states like Washington. 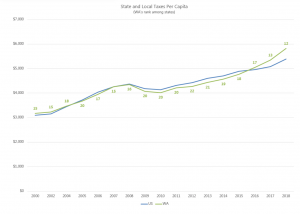 With respect to taxes as a share of personal income, the WRC writes,

As a share of personal income, Washington’s state and local taxes increased to 10.1 percent in 2018 (slightly below the national average of 10.4 percent). Among the states, by this measure, Washington ranked 25th highest (up from 30th in 2017). (Washington had the 7th highest personal income per capita in 2018.) 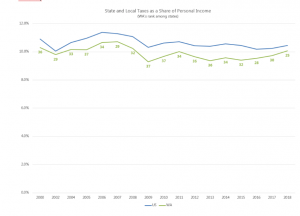 Expect next year’s report to show another increase. That’s because, as the WRC writes,

The Census figures cover the state fiscal year (July 1, 2017 through June 30, 2018). Thus, they include just a half year of the substantial increase in property taxes that was enacted (for calendar year 2018) to help fund the spending increases related to the McCleary decision on school funding. Further, the substantial tax increases enacted in 2019 are not incorporated in the data yet.

The information is timely as lawmakers are said to be considering tax increases to offset the COVID-19 budget shortfall.