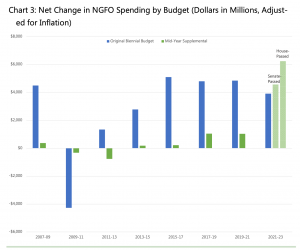 Some would say a supplemental budget year ought to make for a quiet few months in Olympia, but no one has that luxury with the number of urgent concerns facing our state. We must act now on issues that the pandemic highlighted and further compounded,” Inslee said. “It may be a short session, but we have a long list of things to accomplish together.”

The Legislature responded: Message received. As the Washington Research Council details in a new policy brief, the budget plans introduced by the House and Senate contain “biennial-sized spending.” The graph at the top of this post shows just how extraordinary are the proposed spending increase.

Both budgets would reduce revenues slightly. The Senate would direct more of the surplus to reserves than the House, but even the Senate’s effort falls short of reaching pre-pandemic levels of reserves.

Given the economic uncertainty and the recent Superior Court ruling that the capital gains tax is unconstitutional, the Legislature should reevaluate its spending priorities and put more into the rainy day fund this year.

It’s unusual for conference committees to agree to a budget that spends less than the lower of the two budgets being reconciled. But it would be appropriate this year, for reasons laid out by the WRC.

We recommend reading the brief.