An article in Crosscut by a KCTS producer (complete with a 3-minute cartoon on tax policy) attempts to make the case for a progressive income tax. Although the cartoon is more entertaining than convincing, the arguments follow a familiar pattern.

…Washington has a tax problem.

It simply can’t seem to raise enough money to fund basic services. Especially not in ways that feel fair to most people or even meet what courts say are the fundamental expectations for important services.

The article hits on the usual touchstones: an “antique tax structure” little changed since the 1930s (this is also true of most states’ tax structures), an “inadequate” system that doesn’t raise enough money, and an “equity” problem.In a nutshell: Taxes are too low and the burden falls too heavily on low-income people.

And the solution is also predictable:

It’s no wonder that some louder voices are talking about a state income tax, long considered the third rail of state politics. Opponents point out that the state constitution only allows income to be taxed uniformly — no graduations, no exemptions. Seattle has recently challenged this notion, with the City Council unanimously passing a city income tax that will address incomes over $250,000. Observers believe the bill is certain to tee up a court challenge.

Let’s look into some of this briefly. First, Washington’s state and local tax collections rank roughly in the middle of the 50 states, as shown below in this screenshot from the Competitiveness Redbook (most recent data available): 22nd highest on a per capita basis; 33rd when viewed as a share of personal income. 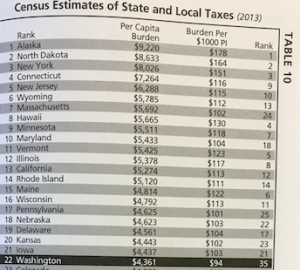 The state Department of Revenue also looks at comparative state and local tax burdens and provides links to interactive maps.

We’ve addressed the regressivity argument before, most recently in this blog post. Key point from a Lens report:

As [the Lens] reports, a report from the Institute on Taxation and Economic Policy (ITEP) is generally citied by those claiming the tax structure is regressive. Yet, the ITEP study has been challenged by tax experts and economists.

However, Tax Foundation Senior Policy Analyst Jared Walczak writes that the ITEP study erroneously treats the B&O tax as a sales tax paid by the consumer, rather than employers.

Similar criticism has been raised by WRC’s Research Director and Senior Economist Dr. Kriss Sjoblom. He told Lens that the study “overestimates the amount that poor people consume, and then as a consequent overestimates the amount of sales tax poor people pay. A lot of those businesses taxes are assumed to be passed on to consumers prices that are being paid by the poor.”

What makes the system “regressive” are the high “sin” sales taxes on liquor and cigarettes, he added. According to the Center for Disease Control, “people living below the poverty level and people having lower levels of educational attainment have higher rates of cigarette smoking than the general population.”

And with respect to the supposed inadequate revenue production of the system, we would simply note the robust revenue growth since the recession, as predicted here.

The WRC cites research published by the Urban Institute/Brookings Institution Tax Policy Center looking at fiscal years 2013-2017 and compares national performance with our state. They conclude that

Washington’s revenue growth exceeds the nationwide average in each of the five years. Who’d a thunk our creaky old tax system would stack up so well?

Back, for a moment, to the Crosscut piece.

Both Minnesota and Colorado are among a majority of states that combine an income tax with a smaller sales tax in a more broadly-based tax system.

Comparing state budgets is the wrong approach. Education is typically the first or second largest item in state budgets and states vary substantially in how they fund education. Many states rely much more heavily on local governments to meet that responsibility, meaning that the state budget will be smaller. Some rely more on state funding than Washington – though the recent McCleary response will reduce that number. The best measure – always – is a combined state/local number, which is why tax burden analysis uses that criterion. Besides, we suspect that there are those that would question a metric of fiscal success that is based on how much money state government spends.

States also vary in the degree to which they rely on taxes paid initially by businesses or individuals (we say initially, because the business tax burden will ultimately be passed through to consumers, employees and owners). We again recommend the Washington Research Council’s policy brief on business taxes, published earlier this year and this Council on State Taxation 50-state report we referenced earlier this month.

That’s enough for now. We welcome the debate on tax policy. There is no perfect tax structure and there are many ways to distribute the burden that produce adequate results. States routinely adjust rates and bases to correct for perceived and real problems. So does Washington. At the same time, we weary a bit of the continued insistence that if Washington only had an income tax our problems would be solved. We need look no further than the Oregon and California for demonstrations of the volatility and business climate challenges attendant to a progressive income tax regime.