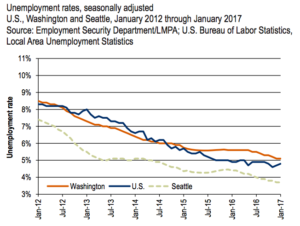 Washington’s economy continues to show a significant gap between urban prosperity and struggling rural counties. The pattern, of which we’ve written previously (here and here) is confirmed by the January employment report from the Employment Security Department. ( See county unemployment map.)

The employment report leads with the numbers overall:

On a not seasonally adjusted basis, estimates for January 2016 through January 2017 indicate an increase in employment of 84,600 for the state. The private sector added 73,800 jobs while the public sector gained an estimated 10,800 jobs over the year.

The industry-specific overview for the month reports:

Based on a BLS survey of businesses and governments, Washington lost an estimated 7,200 jobs during the month, on a seasonally adjusted basis:

While much of the state’s economic activity remains centered in the prosperous metro Puget Sound region, it is vital that policymakers consider the impacts of their tax and regulatory policy on struggling rural regions.