The Washington Research Council reports that the state has posted the second strongest revenue growth in the nation since the Great Recession. The WRC walks through the series of upward revisions in revenue forecasts and continued growth above projections, pointing out:

This graph tells the story of steep revenue growth. 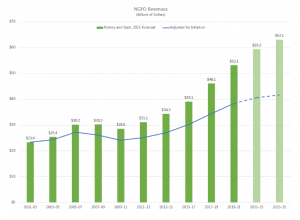 according to Pew, Washington has the nation’s second-highest tax revenue growth from the pre-Great Recession peak through the first quarter of 2021. Tax revenue over this period grew by 40.2% in Washington, by 41.3% in California (the nation’s highest growth), and by 18.1% for the 50-state total.

The WRC closes with with a polite cautionary statement.