Pew reports states close out 2020 with widespread tax revenue gains. Washington is among the biggest gainers, as the map below shows. 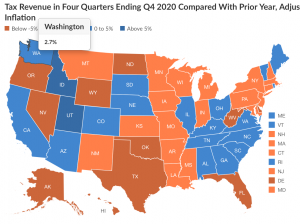 Boosted by widespread gains in the fourth quarter, total state tax collections had recovered to just 1.9% below their pre-pandemic levels by the close of 2020, after adjusting for inflation, and receipts in 20 states had rebounded fully. Overall, state tax revenue has been on track to bounce back far faster than it did after the Great Recession.

Among the top gainers.

Idaho (11.2%) and Utah (5.8%) were the only two states to post tax revenue gains of 5% or more since the start of 2020—shortly before the pandemic’s outset. The increases were due in part to much faster growth in both states’ populations and economies—as measured by state personal income—than the national trend during the same period.

Three-quarters of states (38) reported higher revenue in the final quarter of 2020 than at the end of 2019, just before the pandemic. Gains ranged from more than 10% in California, Colorado, Idaho, New Jersey, and Washington to less than 1% in Iowa, Louisiana, Missouri, New Hampshire, New York, and Oklahoma.

But there’s more, as the Washington Research Council writes.

Comparing the pandemic period of April–December 2020 with the same period in 2019, state tax revenues grew by 2.6% in Washington—the 7th highest in the country. The average growth in the U.S. was negative 2.2%.

Pew adds data on the changes in state tax revenue from the pre-Great Recession peak. As shown in the chart below, Washington’s revenue growth has outpaced the nation since 2015. Our growth since 2008 (39.4%) is now the highest in the country. 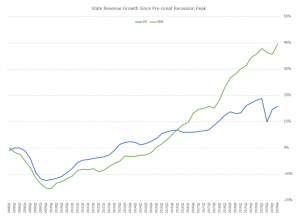 Remind us again: Why did lawmakers think they needed to raise taxes this year?