The Washington economy remains healthy. And its health continues to be reflected in state tax revenues.

The Economic and Revenue Forecast Council reports that collections for the most recent month outpaced the last forecast.

As this table from the report shows, the state’s been on an extended revenue-growth trend. 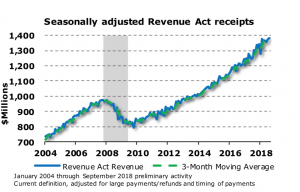 Key takeaways from the report:

The Associated Press reported on the strength of the labor market.

Paul Turek, labor economist for the department, noted that the rate has been setting new monthly lows since May, and that October’s rate establishes the latest historic low for unemployment since comparable record-keeping began in 1976.

“It’s definitely a trend,” he said. “What we’re looking at is essentially an economic expansion coming out of the recession.”

Trade policy remains a concern, as the Seattle Times reports.

Roughly six months after the first big round of tariffs went into effect, the cost to Americans from the country’s widening trade disputes with China and other nations is rising — with the biggest hit, not surprisingly, falling on trade-dependent states like Washington.

Between April and September, according to a new report, Washington farmers and other export-dependent producers saw foreign sales plummet by between 20 and 28 percent over the same period last year. The losses stem from tariffs on U.S. exports imposed by China and other trading partners in retaliation for import tariffs levied by the Trump administration.

Trade losses affect rural areas and Washington agriculture. The issue came up at the recent Association of Washington Business rural jobs summit, which focused on improving economic vitality in rural communities. For example,

To illustrate the complex costs that come from tariffs and trade disputes, Steven Sudol of Chateau Ste. Michele held up a bottle of 14 Hands Red Blend. From the bottle to the foil around the cork, every fraction of a penny counts — and tariffs can cost both at the production end and in declines of a potential customer base, he said.

Again, we encourage you to read the ERFC monthly reports, and commend them for providing timely and useful information.