Despite shutdowns and showdowns in D.C., Brexit and Eurozone worries, and a trade war with China, Washington tax collections keep rolling into state coffers.

The latest monthly update from the state Economic and Revenue Forecast continues the string of positive reports.

Since the November forecast there have been $36.1 million in one-time large payments (net of large re- funds) that were not anticipated in the forecast. Without these payments, collections would have been $117.5 million (2.2%) higher than forecasted.

As the graph below (taken from the report) shows, it’s been quite a run. 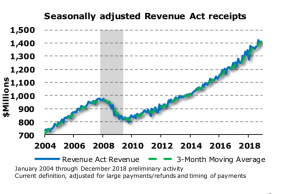 The report is generally upbeat about the national and state economies.

National data continue to paint a generally positive picture of the economy. The labor market was again very strong this month with a larger than expected increase in jobs and continued moderate wage increases. Manufacturing indicators were generally positive and although non-manufacturing activity slowed it continued to expand. Consumer confidence weakened this month, possibly in reaction to the federal government shutdown…

Two key measures of consumer confidence declined this month but still remain at high lev- els. The University of Michigan index of consumer sentiment decreased by 7.1 points in January to 91.2. The Conference Board index of consumer confidence decreased by 6.4 points in January to 120.2. Consumers responding to the Conference Board survey were less confident about future business conditions and job prospects compared to December while respondents to the University of Michigan survey indicated concerns about both cur- rent and future economic conditions.

In a sign that the local housing market has cooled, seasonally adjusted Seattle area home prices fell 0.3% in November according to the S&P/Case-Shiller Home Price Indices. This was the fifth consecutive monthly decline. In November, the over-the-year growth was 6.3% in Seattle compared to 12.7% a year ago. Seattle home prices are still up 87% since the December 2011 trough and exceed the May 2007 peak by 30%.

Considerable uncertainty remains, as indicated by news that industrial output declined in January, but so far collections have not suffered.