As most people expected, the state Supreme Court agreed to wait until lawmakers complete their work before they evaluate it. The order makes clear that the justices expect progress and will demand accountability. 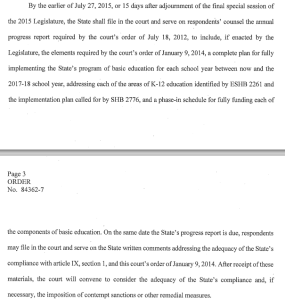 While it’s still unclear what form “imposition of contempt sanctions” might take, it’s clear that lawmakers will need more time reach agreement. Yesterday we updated our “budget progress” post to show that the report of progress, like Mark Twain’s reported death, was “an exaggeration,” apparently premature.

Sen. John Braun, vice chairman of the Senate Ways and Means Committee, said it was premature to have called it an agreement on Friday. There wasn’t an agreement, he said.

“There was a lot of discussion about trying to get to an agreement,” Braun said shortly before he and Senate Majority Leader Mark Schoesler met with Inslee.

Talks continue and progress is likely. In the Olympian, Bill Keim and Nancy Moffatt, the staff leaders of the associations of school administrators and school budget officers, respectively, have an op-ed identifying ways lawmakers could satisfy the court. They evaluate Senate and House plans.

To its credit, the Senate has introduced multiple specific proposals which, if implemented, would quickly begin to address the unconstitutional aspects of our current system. An important element of these bills prohibits levy support of basic education compensation…

Across the chamber, the House bill is basically a plan to plan. The Supreme Court is likely to view that approach as too little, too late…
A third alternative, which might garner the support of both chambers and the Supreme Court, received informal support from a group of key House Republicans and Democrats during a May 21 work session convened by Rep. Ross Hunter. The proposal began with a commitment to fund basic education compensation.

They look at the third alternative – more detail in the op-ed, which is worth reading – offers promise.

We strongly encourage bipartisan deliberation around that kind of significant, but more limited step. It makes substantial progress toward an overall solution while recognizing that more thoughtful planning is needed for the comprehensive solution.

We’ll see.
This is taking longer than anyone desired, though a shutdown remains unlikely.
Meanwhile, the Washington Education Association continues to urge full funding of Initiative 1351, the class size initiative passed last fall. The one thing most lawmakers agree on is that 1351 is simply unaffordable. The budgets proposed by the governor, House and Senate all rejected full funding of the measure.
We all, like the court, have a little more time to wait and see how lawmakers bridge the tax-and-spending chasm  that continues to divide them.