The Economic and Revenue Forecast Council today reported that tax revenues are coming in higher than forecast in November.

Revenue Act collections for the current period came in $115.7 million (8.8%) higher than the November forecast, as the decline in taxable activity from decreased federal stimulus and increased pandemic-related restrictions turned out to be less than expected.

This graph from the report shows the strength of the revenue (not economic) recovery. 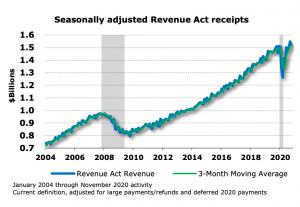 Here are ERFC’s bullet points from the monthly update.

Although lawmakers continue to float proposals for tax increases, the revenue numbers confirm that the state budget balances for four years without adding the burden of additional taxes to households and businesses continuing to struggle. As the Washington Research Council pointed out before these new revenues were reported,

…it’s important to remember that the 2019–21 budget still balances without any additional action from the Legislature. (It also easily balances over four years if the rainy day fund is used.)

This is good news.