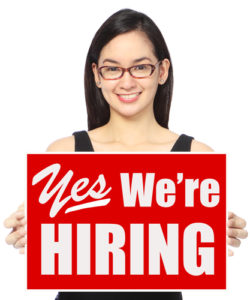 The Employment Security Department announced that the state unemployment rate for Washington dropped to 4.7 percent in March.

Washington’s seasonally adjusted unemployment rate fell from 4.9 to 4.7 percent in March – the lowest rate since August 2007, according to the state Employment Security Department.

“Washington has one of the better growing economies in the nation,” said Paul Turek, economist for the department. “Strong job growth has pushed the unemployment rate down further as more workers find jobs.”

That’s good news, certainly, and confirms perceptions that the economy continues to do relatively well. The drop from one year ago is impressive.

In March last year, the statewide unemployment rate was 5.6 percent.

Yet, as this map of county unemployment rates in February (not yet updated for March) demonstrates the still-uneven economic performance in various regions of our state. 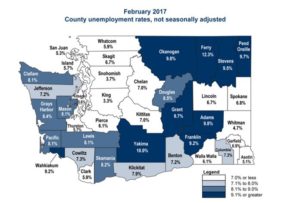 As ESD points out the low statewide number is still higher than the national unemployment rate. And the Seattle metro area continues to post very low rates.

The national unemployment rate was 4.5 percent this March and 3.3 percent in the Seattle/Bellevue/Everett area.

Reporting on the data, the Associated Press writes,

The industries that saw the greatest job growth last month were leisure and hospitality up 2,700, education and health services up 2,500 and professional and businesses services, which gained 2,300 new jobs. Wholesale trade saw the biggest reduction in March, losing 1,400 jobs.

Overall, good news. But also a reminder that there’s work to do if we are to realize the goal of shared prosperity statewide.