The headlines are good news. The Seattle Times, for example, posts the latest jobs report under the header State’s jobless rate shrinks to 5.5 percent, close to U.S. average. That’s true and something to be celebrated.

But we still want to call your attention to this map from the state Employment Security Department. (It’s for March, the most recent on the ESD web site.) 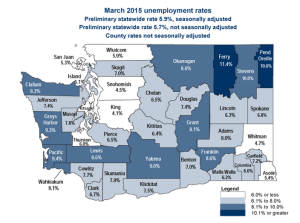 King County is doing great, as are a few others. But it’s hard to overlook the high numbers in other parts of the state. The uneven recovery remains a concern to us, which is why we drafted our roadmap for expanding Washington’s culture of opportunity to individuals, families, employers, and communities in every corner of the state.

The Times does note,

The Seattle-Bellevue-Everett area continued to show lower joblessness than the state as a whole, with a 4.3 percent unemployment rate in April, down from 4.5 percent in March and from 4.9 percent in April 2014.

We can, and must, do better.