According to numbers released Wednesday by the Employment Security Department, May’s rate had been revised down from the originally reported 4.7 percent. The state also added 6,000 jobs in June, with the largest job gains seen in education and health services, information and manufacturing. 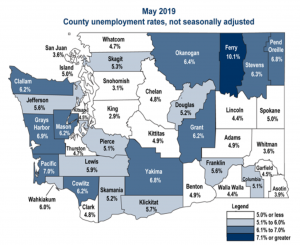 The pattern persists nationally, as Bill Bishop writes at the Daily Yonder.

Jobs continue to cluster in the nation’s largest cities, according to the latest federal employment figures. While rural America gained jobs in the last year, the pace of growth was just a fraction of what was seen in urban counties.

The country gained just over 1.5 million jobs between May 2018 and May of this year, according to the Bureau of Labor Statistics. Six out of 10 of those new jobs were created in the country’s largest cities, urban areas of a million or more people. 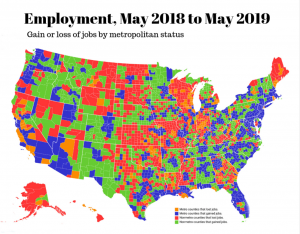 Washington has fewer patches of red (nonmetro counties that have lost jobs) than many other states, but clearly, the work to expand economic opportunity and prosperity through the state is far from complete.