From 2014 to 2015, median household income in Washington state grew 4.4 percent, to $64,129. That growth rate is 3 percentage points higher than economic growth in the state, according to an analysis by Stateline. Washington was far from alone, but

In 49 states, median income increased at a faster rate than per capita gross domestic product, according to a Stateline analysis of census data and figures from the U.S. Bureau of Economic Analysis.

New Jersey was the exception, as the map below shows. 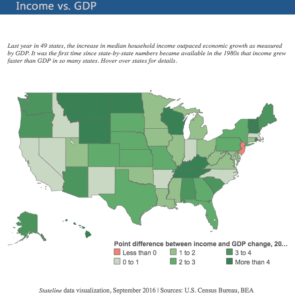 Stateline reports that the one-year boost breaks with a longer, troubling trend.

Analysts across the ideological spectrum have noted the “great decoupling” between earnings and economic growth, which has existed nationally since the 1970s. The gap grew after the recession: Between 2009 and 2012, U.S. GDP grew by 4 percent, while inflation-adjusted median income fell by 4 percent. In 2010, the gap hit a single-year peak of 5 percentage points, as GDP grew 2.2 percent and income fell 2.8 percent.

And there’s concern that this year’s results may be an outlier.

Lane Kenworthy, a University of California at San Diego economist who has studied the gap between income and GDP, said the one-year change was heartening but likely not the start of a new trend.

“It’s good news, to be sure,” Kenworthy said. “But I don’t see any sign that the deep-seated obstacles to shared prosperity have abated. So I’m not optimistic.”

We’re partial to the concept, to the goal, of shared prosperity. And we’re optimistic about growth prospects in Washington. But we don’t take it for granted.

That’s why we continue to promote our roadmap to shared prosperity and advocate for continuous improvement in our priorities of Achieve (education), Connect (transportation) and Employ (economic vitality). Together, we can make shared prosperity a reality in every part of our state.