As a historic wave of layoffs continues, states are grappling with evaporating funds for unemployment benefits that could force cuts to those payments or hikes in business taxes.

Thirty-one states already are dipping into federal CARES Act dollars or seeking federal loans to keep money in the unemployment coffers. Those and other states also are considering legislation or other actions to fend off business tax increases triggered by high jobless payouts.

The Stateline map shows how widespread is high unemployment. 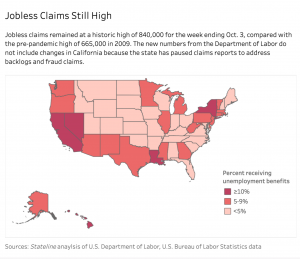 “It is a big deal for states and businesses,” said Shelby Kerns, executive director of the National Association of State Budget Officers. “States generally do not want to increase taxes on businesses in an economic downturn, and borrowing only pushes those increases to the future, which can make the economic recovery more difficult.”

Washington comes out comparatively well in the article.

One bright spot is Washington state, which announced in September it would not have to raise business taxes by $200 million next year as anticipated. State law requires a “solvency tax” increase if the fund can’t pay seven more months of benefits, but brighter revenue forecasts made the tax unnecessary and the state will not have to borrow federal funds for now.

However, Washington likely will have to borrow money next year when the fund is projected to drop below three months’ worth of benefits, according to a report this month by the state’s Employment Security Department.

As we’ve written, though, the good news is somewhat limited, as employers continue to face potentially sharp increases in experience-rated and social cost taxes. As Stateline reporter Tim Henderson writes, there are valid concerns about raising taxes on businesses emerging from a long and deep recession. Michigan and Louisiana, he writes, have laws that automatically impose tax increases as the trust funds shrink.

State laws like those in Michigan and Louisiana triggering tax hikes can hurt employers struggling to recover from the pandemic, said Jared Walczak, vice president of state policy at the … Tax Foundation based in Washington, D.C.

“Laws like this are intended to increase taxes precisely at the time businesses are least able to pay them,” Walcack said, “which is why states so often wind up creating exceptions to prevent the laws from doing what they were designed to do.”

States should be using boom times to set aside unemployment money for the next recession, so they don’t punish employers just as they need a break to reopen and rehire, he added.

Washington had a healthy trust fund at the beginning of the pandemic recession, as did a number of other states.

“States actually started this recession in better shape than the last one, but it was just so steep,” said Michele Evermore, a senior policy analyst at the National Employment Labor Project, which has advocated for at least three years of interest-free federal loans to help states get through the unemployment crisis without raising business taxes immediately.

As 2021 approaches, employers face a number of major recovery challenges. Steep UI tax increases should not be among them.