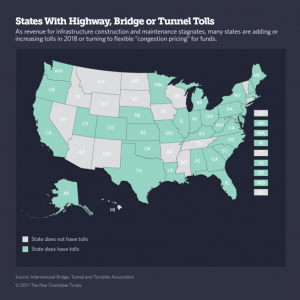 Toll roads are nothing new, but in recent years, states have increasingly turned to tolling both to raise revenues and manage congestion. As 2018 begins, Stateline reports,

With gas tax revenue stagnant and transportation funds scarce, states are turning to toll roads in 2018 to fill treasuries and manage traffic…

The full list of new tolls is hard to track, but at least a half-dozen states from Florida to Colorado are slapping tolls on roads that used to be free or building toll-only lanes this year, and many more are expected to do so next year.

As the article reports, it’s not just state governments and it does have a lot to do with gas tax revenues becoming insufficient to meet demand.

Bill Cramer of the International Bridge, Tunnel and Turnpike Association said the lack of funding from gas taxes is “100 percent” of the reason tolls are being imposed or going up. “Local governments are seeing this as a viable and useful option,” Cramer said. “It pays for the road, provides a steady stream of revenue to maintain that road at high quality and safety. And they have been very reluctant to raise the gas tax that would fund those roads.”

In our state, to take just one example, consultants recommend bumping the tolls on I-405 to increase the efficiency of express lanes. Another alternative/supplement to the gas tax is also being tested here: a pay-per-mile experiment.

Stateline notes the coming tunnel tolls in Seattle (no mention of the negative toll proposed by a Seattle Times columnist).

In Seattle, talks are starting about how to charge tolls on the State Highway 99 tunnel under its downtown. The tolls are scheduled to go into effect this year, but a long ramp-up period is expected once the state transportation commission settles on the fees. Proposals include tolls that would vary during the day, from $1 overnight to a top rate of $2.50 for an afternoon trip.

Washington’s population and economy continue to grow. And with that growth, we see increased demand on our highways and streets. Our latest Opportunity Washington Scorecard reports on our Connect (transportation) measures:

Washington’s Connect ranking drops one spot to 39, after accounting for updated commute time data. Our state’s average commute time increased to 27.8 minutes in 2016, likely a byproduct of robust population and economic growth. With implementation of the 2015 Connecting Washington package, Washington is making significant investments in its statewide road and bridge networks, ferries, and public transportation systems, which will help improve system performance over time.

It’s likely that additional investment will be required to keep up with growth. And it’s likely that policymakers will continue to seek supplements to gas tax revenues.