Population growth and economic vitality have trended toward metro areas for years. One challenge faced by rural communities has been a technology gap.

Rural economies also depend on technology. And Microsoft has recently unveiled a strategy for expanding broadband to underserved rural communities. Earlier this month, Microsoft president Brad Smith presented the company’s thoughts on the broadband gap.

Broadband connectivity is no longer simply a luxury for streaming YouTube videos on a tablet (as enjoyable as that may be). It has become a critical connection to a better education and living. New cloud services are making broadband a necessity to start and grow a small business and take advantage of advances in agriculture, telemedicine and education. In short, broadband has become a vital part of 21st century infrastructure.

In the Daily Yonder, a trio of researchers reports that millennials are voting with their feet. And the results may surprise you. 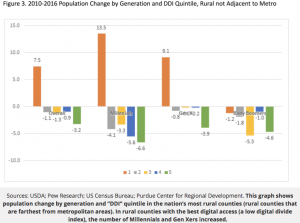 Figure 3 shows counties considered completely rural or with an urban population of less than 2,500, not adjacent to a metro area. Among these counties, about 420 in total, those with the lowest digital divide experienced a 13.5 percent increase in millennials between 2010 and 2016. In other words, in the nation’s “most rural” counties, the millennial population increased significantly when those counties had better broadband access.

The researchers acknowledge overall trends continue to document migration toward urban areas, as expected. They conclude, however,

What is clear though is that (while other factors are having an impact, as well) any community attempting to retain or attract millennials need to address their digital divide, both in terms of broadband access and adoption/use.

In other words, our data analysis suggests that if a rural area has widely available and adopted broadband, it can start to successfully attract or retain millennials.

Factors like a lower cost of living, affordable housing, and a high-quality lifestyle have suggested a rural comeback may be in its early stages. Having access to the technology increasingly required to expand economic opportunity can accelerate the recovery.