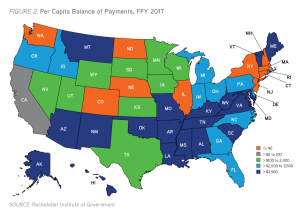 Earlier we wrote about Washington’s relative fiscal condition and federal aid, so it’s timely to share this recent Rockefeller Institute analysis of state balance of payments with the federal government. The Institute looks at how much each states’ taxpayers (business and individual) pay in federal taxes compared to how much federal spending the state receives. The difference is the balance of payments.

Washington is one of only ten states that send more cash to D.C. than the state receives in federal spending. (See the map above.)

Here’s how the report explains the calculations.

This “balance of payments” (BOP) analysis provides a close look at the effects of Federal economic redistribution policies on states, and offered here is a particular focus on New York and its standing relative to other states.

Some states receive far more in Federal spending than their residents and businesses pay through taxes, while other states give far more than they get. The Federal system concentrates grants and funding to states with highest poverty rates for their residents, like Federal grants to support programs of aid for the needy (Medicaid, Supplemental Nutrition Assistance Program, Temporary Assistance for Needy Families, etc.). Payments to individuals under the Social Security and Medicare programs are disproportionately concentrated in states with large elderly populations. States with large defense contracting sectors and more military bases get more Federal defense spending. Federal wages are disproportionately concentrated in states with a large Federal employment presence.

On the other side, receipts are generated primarily from taxes, the most significant of which is the personal income and employment taxes, which account for almost 75 percent of allocable Federal revenue. Logically, then, this Federal revenue is raised disproportionately from residents of states with more high-income individuals who pay taxes at the highest rates under the progressive Federal income tax structure.

Governing magazine lists the states with a negative balance of payments.

Residents in Connecticut, Massachusetts, New Jersey and New York have some of the highest tax bills in the nation. They also pay thousands more in federal taxes than their state receives back in federal funding.

In total, 10 states are so-called donor states, meaning they pay more in taxes to the federal government than they receive back in funding for, say, Medicaid or public education. North Dakota, Illinois, New Hampshire, Washington state, Nebraska and Colorado round out the list.

The distribution always prompts some discussion. Should states receive spending back proportional to their contributions? Or, is the system working as it should, using the progressive federal income tax to fund social service and income support programs that states with higher concentrations of poverty could not afford to provide?

What do you think? The RI report provides a lot of good data to inform the debate.