Washington state ranks second in the country when it comes to states contributing the most to the nation’s position of innovative strength during the tech era, according to a new study from WalletHub, the Washington, D.C.-based personal finance website.

The 2019 Most & Least Innovative States report compared the 50 states and the District of Columbia across 24 key metrics in two dimensions, “Human Capital” and “Innovation Environment.” Washington ranked second overall behind only Massachusetts.

WalletHub has become well-known for its ranking reports (“listicles”), but give them credit. The site is transparent about its methodology and in an era of data-crunching algorithms, WalletHub seems to do this stuff well. The metrics make sense.

WalletHub compared the 50 states and the District of Columbia across 24 key indicators of innovation-friendliness. Our data set ranges from share of STEM professionals to R&D spending per capita to tech-company density.

And the group supplements the data analysis with expert commentary.

Besides, the rankings conform with most observers intuition. 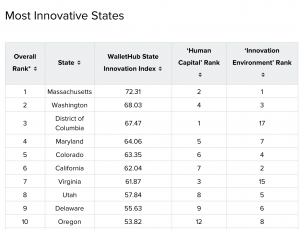 Here is how the state ranked in other areas, with 1 being most innovative and 25 being average: