For the first time, more than half of the CEOs we surveyed believe the rate of global GDP growth will decline. This caution has translated into CEOs’ low confidence in their own organisation’s outlook. Only 27% of CEOs are ‘very confident’ in their prospects for revenue growth in 2020, a low level not seen since 2009. This finding is compelling because the change in CEOs’ revenue confidence has proven to be a reliable indicator of both the direction and the level of global GDP growth in the year ahead, according to our analysis.

Mark that: The change in confidence is a reliable indicator of economic growth.

Including responses from 1,581 officers spanning 83 territories, the report featured a jarring main takeaway: Pessimism about global economic growth is at a record.

More specifically, 53% of CEOs surveyed are predicting a decline in the rate of economic growth in 2020, up from 29% in 2019 and many multiples higher than the mere 5% registered in 2018. The sharp upward trend can be seen in the chart below. 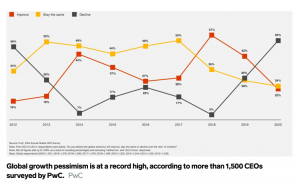 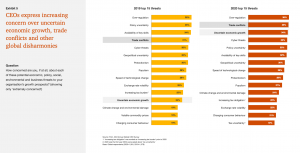 The 48-page report contains a lot of fascinating information and graphics. The Associated Press reports,

PwC said pessimism was widespread but particularly so in North America, Western Europe and the Middle East.

“Given the lingering uncertainty over trade tensions, geopolitical issues and the lack of agreement on how to deal with climate change, the drop in confidence in economic growth is not surprising — even if the scale of the change in mood is,” said Bob Moritz, Chairman, of the PwC Network.

We’d point out that the PwC survey reflects the pessimism shown in a Conference Board survey that found recession risks topped U.S. business leaders’ economic concerns. Coupled with the state Treasurer’s recommendation that the Legislature to set a budget reserve target of 10 percent, consider the PwC survey another strong argument for fiscal restraint in Olympia this year.