The Pew Foundation recently reported the results of a poll testing the public’s view of the federal tax system. Unsurprisingly, most people don’t like it much.

The public sees the nation’s tax system as deeply flawed: 59% say “there is so much wrong with the federal tax system that Congress should completely change it.”

Maybe that’s not so surprising considering the inequality drumbeat. Pew writer Drew De Silver, a former business reporter for the Seattle Times, provides some context, including noting the blurry lines between business and personal income taxes given the various ways businesses are organized. Also, this:

In 2013, according to our analysis of preliminary IRS data, people with adjusted gross incomes above $250,000 paid nearly half (48.9%) of all individual income taxes, though they accounted for only 2.4% of all returns filed. Their average tax rate (total taxes paid divided by cumulative AGI) was 25.6%. By contrast, people whose incomes were less than $50,000 accounted for 63.4% of all individual income tax returns filed in 2013, but they paid just 6.2% of total taxes; their average tax rate was 4.2%.

This may or may not be “fair.” But it is progressive.

Which brings us to today’s installment of the KPLU series on state tax policy, which looks at tax exemptions. Most of them benefit individuals. 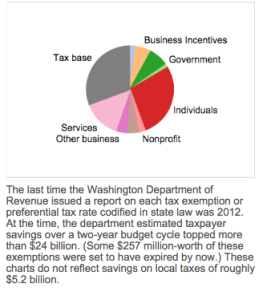 Just a small slice of that pie represents business tax incentives. While lawmakers often look to the exemption lists as a source of potential new money, it’s not that easy, KPLU reporter Kyle Stokes writes.

“What a lot of academics will tell you is that, ultimately, people pay taxes,” said Dick Conway, a regional economist who has argued for an income tax in Washington state.

The reason is that businesses dealing locally easily pass along any tax increase to their customers, a phenomenon the Washington State Tax Structure Study Committee noted in its 2002 report…

On the other hand, Conway worries about the impact of increases on larger corporations based in Washington state. He says the fear with increasing Boeing’s tax burden, for instance, is that the company would either move jobs away or wouldn’t be able to keep up with their competition, Airbus. Either scenario hurts Washington state’s economy, and, in turn, individuals.

Something to think about when the House budget is unveiled tomorrow.