Seattle heads the list for cities with the fastest growth in high-end incomes in this Brooking analysis of income inequality. 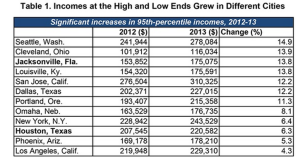 As we noted yesterday, poverty ≠ inequality. Still, the Brooking study adds some important information to understanding urban income trends, information that may be useful to policy makers.

Across the 50 largest cities, households in the 95th percentile of income earned 11.6 times as much as households at the 20th percentile, a considerably wider margin than the national average ratio of 9.3. This difference reflects the fact that in big cities the rich have higher incomes, and the poor lower incomes, than their counterparts nationally. From 2012 to 2013, the inequality ratio widened in both cities and the nation overall, as incomes at the top grew somewhat faster than incomes at the bottom.

That growth in high-end incomes has fueled the urban momentum for minimum wage hikes.

These findings confirm that income inequality remains a salient issue in many big cities today. Moreover, they lend support to the concern that rising incomes at the top of the distribution are not—at least in the short term—lifting earnings near the bottom, even in local markets.

Since the debate over the $15/hour minimum wage started in Seattle in late 2013, many other cities—including Chicago, Los Angeles, New York, and San Francisco—are considering or have enacted increases to the minimum wage locally.

Businesses, responding to market signals, are also acting on their own to boost the minimum wage.

While the minimum wage is a potentially important means for helping low-earner households living in high-cost places, local policymakers should not ignore the other tools they have at hand—from education to economic development to housing and zoning policies—that are essential for improving social mobility and sustaining income diversity in big cities today.

That “potentially important” should not be overlooked. Seattle’s $15 adventure will be getting plenty of analysis, along with plenty of litigation.

In the Opportunity Washington research plan, we reported:

Research is mixed on the effects of incremental increases in the minimum wage, but large increases are clearly associated with declining job opportunities for the young and unskilled. The stakes are also high for small businesses. Economist Gary Burtless, with the Brookings Institution, notes, “The risk of a big minimum-wage hike at the city level is that the city’s low-wage employers will be harmed in their competition with out-of-town businesses that sell the same products or services.”

Washington employers and residents alike place a high priority on the equitable compensation and protection of those in the workforce. Policymakers must carefully consider wage and benefits mandates and system to ensure that such protection are maintained in a cost-effective manner so that employers can create more job opportunities for Washington citizens.

Expanding opportunity – including the opportunity to advance beyond minimum wage employment – should continue to be policymakers’ highest priority.

Concerns over poverty are surely justified. But poverty and inequality are not the same thing — and they are purposefully muddled by those with an agenda.

It matters. We focus on expanding the culture of opportunity, increasing the likelihood that poverty will be reduced as people gain the skills and education they need to get ahead.

Gordon points out one of the hazards of focusing on inequality.

The poverty=inequality misconception is fed by the suspicion that wealth is most likely ill-gotten and/or we live in a zero-sum world. If most people (most voters?) believe either one or the other these we have a problem.

We doubt that most people fall into that trap. But the reminder is worthwhile.

His brief post provides a link to another Tyler Cowan (another economist) post indicating that America has been much more successful in reducing poverty than the official statistics report.