Washington comes out pretty well in The Education Trust’s new report, The Funding Gap: Too Many States Still Spend Least on Education Students Who Need the Most.

Two charts from the report are particularly informative.

The first looks at the funding gap, the difference in funding between the wealthiest and the poorest schools.  Here’s how The Education Trust calculates the gap:

To calculate gaps between the highest and lowest poverty districts, we:

• Sorted all districts by the percentage of students below the poverty line;

• Divided districts into four groups (quartiles) so that each group had approximately the same number of students;

• Calculated the average state and local revenue per student across all the districts in each quartile; and

• Compared the state and local revenues per student in the highest and lowest poverty quartiles.

Washington ranks in the middle, among the states with a rough equity (small gap). 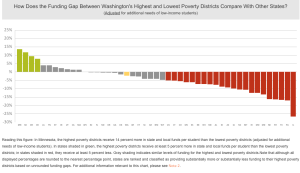 The other chart worth noting addresses an issue central to the current legislative session: the degree to which Washington funds K-12 education from the state budget. The chart ranks Washington fifth highest in share of state funding, with the state providing 65 percent of the state-local funding). That’s behind only Arkansas, New Mexico, Idaho and Minnesota. (Hawaii, which would otherwise top the list, is not included in the Trust’s analysis.)

The report is here. The Washington page here. They compiled a lot of interesting data for those wanting to take a different look at demographics and school funding.

There’s more good news about education, directly relating to providing funds to help low-income students. The Spokesman-Review added its editorial voice to calls to reclaim No Child Left Behind funds. And advocates of doing just that by incorporating student test scores in teacher and principal evaluations turned in 20,000 signatures in support of SB 5748.