The Legislature is in the final days of the 105-day regular session, which often means most of the negotiations take place outside public view. In particular, as we wrote in yesterday’s newsletter, resolving the differences between the House- and Senate-passed operating budgets poses potential difficult challenges. The challenges will be met, of course, and most likely without the extended special sessions we’ve seen in past years.

In The Lens, TJ Martinell writes that House committees have approved a capital gains income tax and voted to continue to study the state tax structure.

Of the former, he writes,

The same week a 2014 legal memo to the Seattle City council regarding a proposed “millionaire’s tax” was released, the House Finance Committee voted on April 19 to advance a bill creating a capital gains income tax to pay for education. HB 2156 would impose a 9.9 percent tax on the income derived from long-term capital gains and direct the revenue stream to the Education Legacy Trust account. The bill would also restructure the real estate excise tax (REET) from its current 1.28 flat rate to a graduated rate.

For some capital gains tax critics, the proposal is viewed as an effort to overturn the state constitution’s prohibition on a progressive income tax. Although the bill refers to it as an excise tax, the tax’s actual definition of capital gains is “the net long-term capital gain reportable for federal income tax purposes.

HB 2156 would impose a capital gains tax and change the real estate excise tax (REET) rate so that it is graduated. The Finance Committee approved a substitute bill on Friday. (We described the capital gains provisions in detail in our brief on capital gains.) The substitute bill approved by Finance changes the capital gains tax exemption for property used in a trade or business to include “tangible property which is subject to wear, tear, decay or decline from natural causes, exhaustion, or obsolescence, including tangible personal property, real property excluding land, and intangible property having a definable life.”

The WRC and others have documented the issues that supporters of a capital gains tax must overcome, beginning with the certainty that the tax will face a legal challenge asserting that it is an unconstitutional income tax and the demonstrated volatility of capital gains revenue streams. Martinell reports on the hearing,

Further cementing the belief by some tax analysts that the bill is meant to trigger a lawsuit was the rejection by the committee of a proposed amendment to HB 2156 that would have prohibited the state attorney general from asking the State Supreme Court to consider the constitutional issue regarding income as property….

In response to the rejected amendment, Washington Policy Center Government Reform Director Jason Mercier wrote that “by refusing to adopt this amendment, it is clear supporters of the income tax on capital gains are trying to set up a lawsuit in hopes judges will do what voters won’t and overturn nearly a century of caselaw prohibiting a graduated income tax.”

Also, the oft-studied state tax structure would be the subject of continued analysis under a bill passed by the House Appropriations Committee. But as The Lens reports, there’s more.

Among the changes made by HB 2157 sponsored by Rep. Gael Tarleton (D-36) is an increase to the preferential business and occupation (B&O) tax rate for travel agents and tour operators from 0.275 percent to 0.9 percent, though a provision eliminating the preferential B&O rate for precious metals and bullion was removed prior to the committee vote.

For all the focus on tax policy changes – most of which are designed to raise taxes – the Association of Washington Business reminds us that the public shows little interest in new or increased taxes. We understate a bit, as the poll graphic below shows. 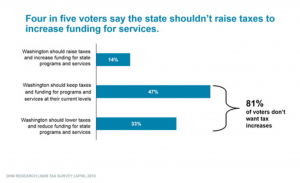 The survey reveals a major divide between the general public and lawmakers in Olympia who are debating whether to raise more than $1 billion in new and higher taxes at a time when the state is already experiencing remarkable revenue growth.

“Washington’s tax revenues have grown substantially since the end of the recession, with the state now projecting collections to top $50 billion for the next two-year budget,” said Association of Washington Business President Kris Johnson. “That means lawmakers have $5.6 billion more to spend on the next budget, without raising any new taxes. It’s clear from this survey that most Washington voters believe this is enough to fund the state’s priorities.”

It’s likely to be a busy couple of days in Olympia.